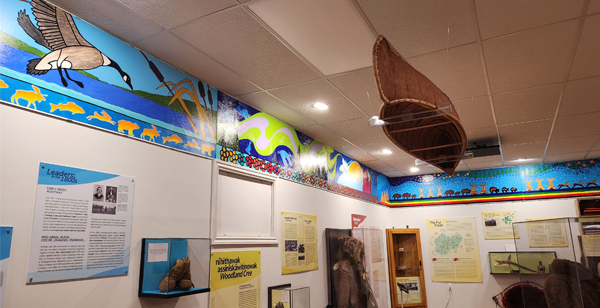 The interior of the Gathering Place exhibit in Prince Albert that is filled with murals and other important artifacts. Photo by Marjorie Roden

Within the walls of the original Prince Albert Fire Hall, now known as the Prince Albert Historical Museum, it was the official opening of a five-year project.

“It just makes my heart happy today to have it completed so we can move onto the next step,” enthused Michelle Taylor, manager and curator for the Prince Albert Historical Society.

However, it’s not the end of the work but rather a whole new chapter in the life of the museum.

“We will continue with expanding it and updating it,’ said Taylor. “We have more room in our tech department, which includes script documents, photos, and other documents.”

The room covers the history of the Prince Albert community from about 10,000 years ago up until 1905. 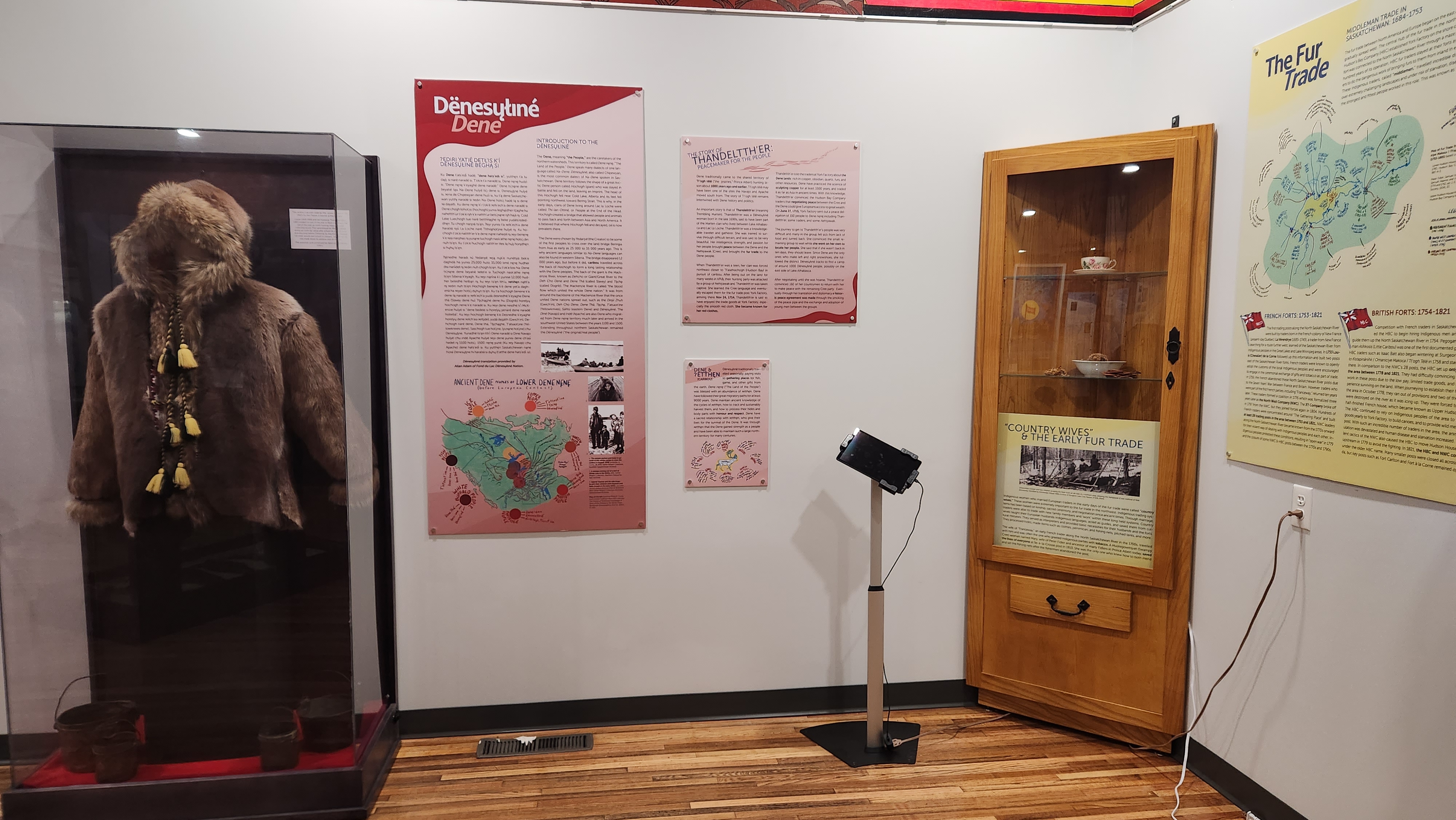 Some of the exhibits on display at the Prince Albert Historical Museum. Photo by Marjorie Roden

“Without our Indigenous friends, Prince Albert wouldn’t have existed,” said Taylor. “So it’s really important that we show the history of (all of) those who helped make the city.”

The room in the museum is called kistapinanihk or the Gathering Place exhibit. Signage is displayed to explain the different parts of PA’s history utilizing both Indigenous languages along with English translations.

One of the people called on to help was Elder Denise Tacan. She provided part of the community’s history on a display in her first language of Dakota.

“I’d like to bring all of my grandkids to this,” Tacan said.

At the opening she was accompanied by two of her eldest grandchildren and she proudly showed off the display that she helped create.

“It’s awesome, I never expected this,” Tacan said. “I just love the murals, they’re awesome. Now that COVID is gone, they can get a lot more done (at the museum).”

Artist-in-Residence, Leah Dorion was also at the opening and said she was proud of how the room turned out. 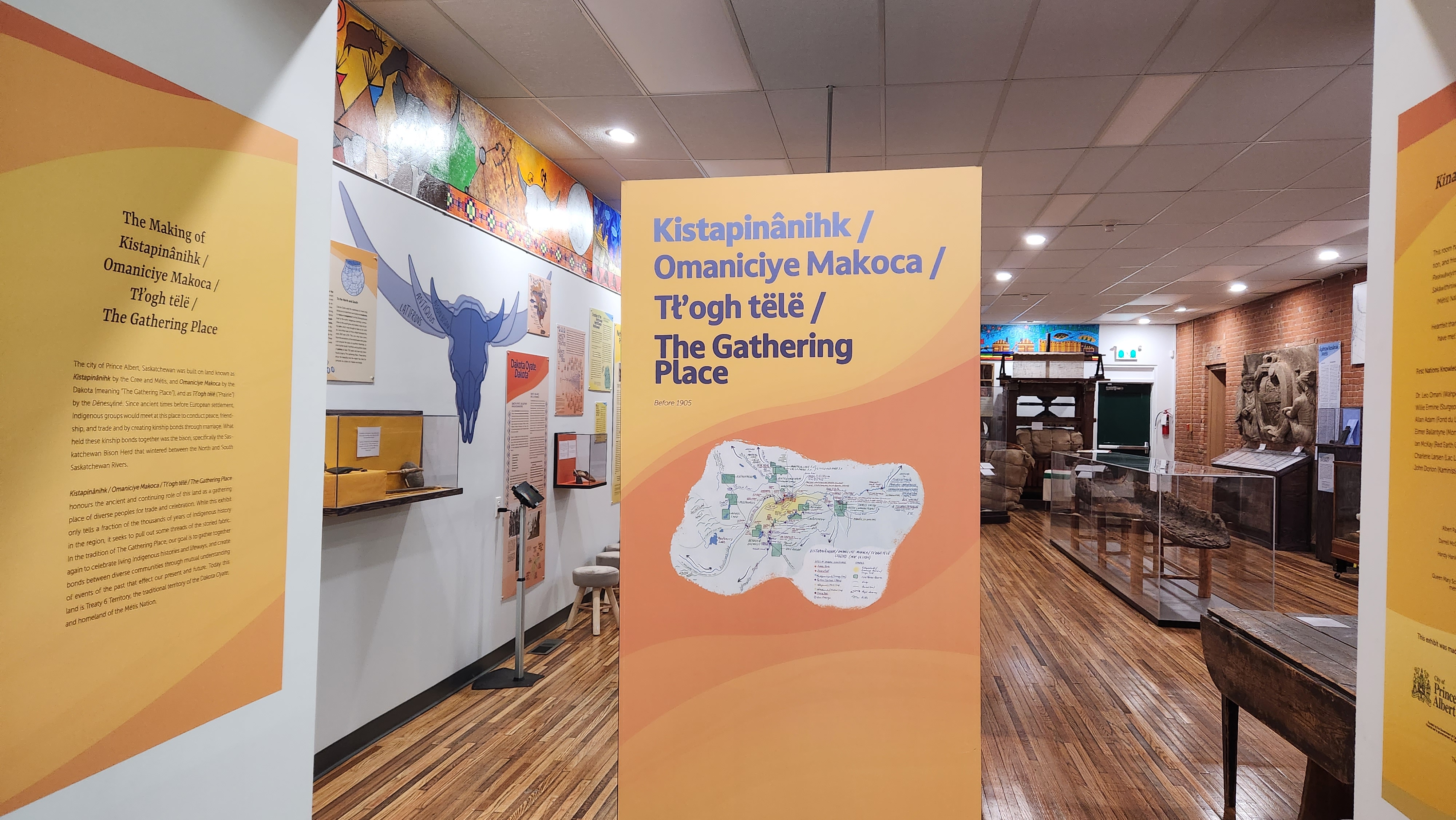 The exhibits at the Prince Albert Historical Museum include both indigenous and English descriptions. The exhibits were created with guidance of several Knowledge Keepers. Photo by Marjorie Roden

“I really enjoyed this because we worked so hard to get this story,” said Dorian.“It went in phases from art to the new artifacts in terms of the signs. I love working with the advisory committee, because there was such a collaborative passion. We wanted to make a greater story.”

Also part of the Knowledge Keepers team was Leo Omani.

“I think it has been a big turnaround in the thinking and, not only with (Indigenous) people, but sharing the knowledge that we have in our society,” said Omani.

“Realizing there’s much more knowledge in this area than when the province came to be, it’s an opportunity for dialogue, and realize that we are not “one”, we are “many”, as an Indigenous people.”

The exhibit is not just a one-off.

“This is very much the starting point to bring Indigenous history to schools and to seniors’ residents,” said Taylor.

“We’re trying to do partnerships with SUNTEP, to develop educational suitcases, so that we can take them out to schools ... Not just schools in Prince Albert, but the outside communities.”

Taylor said although the exhibit focuses on over 10,000 years, she knows what they do have is only a small snapshot of the history that exists, but is pleased with what they have compiled.

“We were guided by the knowledge keepers, we focused on what they felt was important about the history,” said Taylor.

The museum is located on the corner of Central Avenue and River Street, and is open Monday to Friday from 9 am to 4 pm.