MÔSWA radio: a voice for Elders and youth 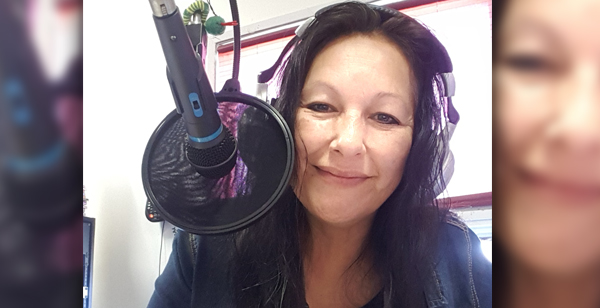 Lana Littlechief has been on-air on “97.7 FM The Moose serving the beautiful Moose Mountains” for almost 20 years. Photo supplied

“I'm blessed to be able to record these Elders, to hear our languages being spoken again,” says Lana Littlechief. “It does something to your spirit inside, so our kids can hear that language and want to speak it someday.”

Lana Littlechief has been on-air on “97.7 FM The Moose--serving the beautiful Moose Mountains” for almost 20 years. Her passion for training youth and recording Elders speaking their languages is inspiring.

The Moose broadcasts in southeast Saskatchewan to White Bear, Carlyle, Arcola, Pheasants Rump and Kenosee Lake, and livestreams at www.themoosefm.com.

In 2000, the president of White Bear Oil and Gas (where Littlechief worked) wanted “to use some of that money to produce something that could help the community into the future,” she said.

In April 2001, White Bear Children’s Charity was incorporated. “We always wanted to give back to youth,” says Littlechief. “That is one of the reasons our radio station was created, so we could make our  youth proud of being First Nations and give them something to look forward to.”

In October 2001, they got a CRTC licence and took a year to set up their tower, renovate studio space, purchase equipment and train DJs. The Moose went on-air December 4, 2002.

Unfortunately, the DJs left, so in January 2003, Littlechief took her place behind the microphone.

One of their license requirements was broadcasting in Indigenous languages.

“If one person can hear that prayer and get strength, that’s what the radio station is for,” she said.

White Bear members speak three languages--Nakoda, Plains Cree and Saulteaux, and a few speak Dakota. “It’s so important to me to have those languages recorded from the speakers that are here, so we can pick up those tools someday,” Littlechief said.

The Moose broadcasts public service announcements, advertising and sponsorships. “There's not a lot of money in First Nations radio,” Littlechief says. “It's a struggle, but it's worth it. I love my job. I love recording Elders. I love sharing who we are as a people.”

Littlechief runs the youth broadcasters program, getting kids to record safety messages and traditional teachings. Carlyle high school students can do work experience at The Moose. “I get them to do bullying commercials, safety commercials and station IDs.

2022 will be the 20th anniversary of the The Moose. Littlechief is already applying for grants for another “Moose Fest.” The first was held at Hotel Beach at White Bear Lake Resort in 2017 to celebrate 15 years.

“I think we can make our First Nations youth feel so proud of who they are,” says Littlechief. “We have a voice on the radio. I see such a resurgence, it makes my spirit soar.”