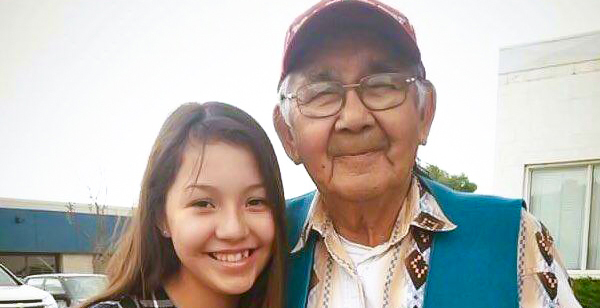 Family members of persons who enlisted or fought in the war remember their loved ones always, not just on Remembrance Day.

Many a brave First Nations soldier went to war traveling far from home, leaving family and loved ones behind, praying for their safe return. Only the soldiers can tell what happened and what they saw or did while they were there. But, sadly, many of our elder veterans are now gone and many of those still with us remain silent on the matter.

The late Edward Baldhead was a Second World War Veteran from the One Arrow First Nation who joined the army soon after getting out of residential school.

His daughter, Sheila Ledoux, says she tried to get a sense of what her dad's life was like when he traveled overseas during the war, but like his residential school days, he chose not to share those parts of his life.

“He kept his memories of residential school and the war to himself,” she said.

Baldhead was a well-respected elder and speaker. Ledoux says he was happy and liked to joke and laugh and was always willing to help anyone who needed guidance.

“My dad was a very hard worker...a very knowledgeable and cultural person when it came to ceremonies,” Ledoux says with pride. “My dad was an elder and pipe carrier who did a lot of work with places like the Saskatoon Tribal Council, FSIN, and schools.”

“He was proud of his veteran status. He was such an honorable man,” she said.

Allan Roy, 62, from Beauval, joined the army in 1978 when he was 19, at the encouragement of his mother. He trained in Cornwallis, Nova Scotia and Wainwright, Alberta, where he was immersed in the military life of barracks, mess hall and marching. Boot camp was tough and almost half of the 120 recruits left before completion.

Roy was sent to Calgary to join the Princess Patricia Canadian Light Infantry. The soldiers, who referred to themselves as 'grunts,' mainly participated in peacekeeping duties.  Roy says it was “casual” compared to the strains of war that others endured and his experience didn’t leave him with the mental anguish that has plagued so many war veterans.

Roy served in the army for three years, then returned home and has worked in uranium mining ever since. He said he has no regrets about the experience.

Roy’s uncle, Louie Roy was a soldier in the Second World War.

“Uncle is 100 years old now and still won't talk about it,” the younger Roy says, “Over the years I have asked him so many times to tell me about the war, but he wouldn't. I guess we will never really fully know what happened.