The new documentary “nîpawistamâsowin: We Will Stand Up” by Tasha Hubbard not only opened the Hot Docs Festival in Toronto, but won the Best Canadian Feature Documentary $10,000 award. Hubbard is grateful but most of all hopes that means more people see it, to really shift the mainstream perspective on Indigenous realities.

“I was taught early in my career that I couldn’t be doing what I do for awards or for recognition, that if I was going to do this work it needed to be about the story and about the community,” said Hubbard. “So, I feel the same way about this (award) - I think it’s great that it’s making more people aware of the film and that people will want to see it — it can be tough to build an audience for documentaries, especially a mainstream audience, so I’m really happy about that. It was a tough film to make because it’s a hard story, so I’m glad it’s been recognized but that was never my goal.”

Colten Boushie was killed by Gerald Stanley on August 9th, 2016, and they began filming in late August, working with his family as they moved through the traumatic legal proceedings. The last filming day was October 2018, with editing beginning the prior month. There were times where they wondered if they would meet their deadlines but Hubbard says she’s still grateful, in awe and humbled by the commitment of the whole team from musicians, illustrators and animators, sound design, and everyone else, working long days to finish it.

“Yes, it was fast, because we wanted to premiere it at Hot Docs, they knew about the film and were interested and it’s a great platform to launch documentaries worldwide, so all of us dropped everything and dug in to finish it.”

With this film, Hubbard has included parts of her own story as context, interweaving growing up as a 60s Scoop adoptee on a rural farm, and most of all being the mother of a young Indigenous son growing up on hostile homelands.

“Every film I decide to make I think about how to tell it, there’s different styles of documentaries and I’ve been taught to think about what would best serve the story and for this one, I was thinking about how to tell the story and what the family went through alone is so important and heart-breaking. But I felt it on a personal level, I responded to the news on a really personal level, I was struck by what this meant for our community, what this was going to mean for the future and the question marks that it raised,” said Hubbard, adding she knew this family’s journey through a legal system based in colonial laws which have actively oppressed and disenfranchised Indigenous peoples would be hard, and her own experience being raised in an adoptive family and rural community uniquely positioned her to navigate important conversations. “I realized that there were things I learned as a child, like gun safety and respect for guns and what they can do, that I thought I can use my position to talk about these things.”

Most of all she made the film not just as a filmmaker, Cree person, resident of Saskatchewan, but as a mother, with full sympathies to Debbie, Colten’s mom, and her own maternal concern for the future. She gives full credits to Colten’s family.

“I think I’d just like to say that the family’s role as advocates, nobody asked to be in this position, no one wakes up in the morning and thinks that this is going to happen to their loved one, and Colten was loved,” said Hubbard, who was told time again what a kind and helpful young man he was. “This family really quickly understood what this was meaning to other people, besides their own deep loss, they realized that his death was affecting other people and they wanted to support other people...they wanted justice for their son and they didn’t get it. Instead of sitting down and going home, they said this isn’t right, what does this mean for other young people?” 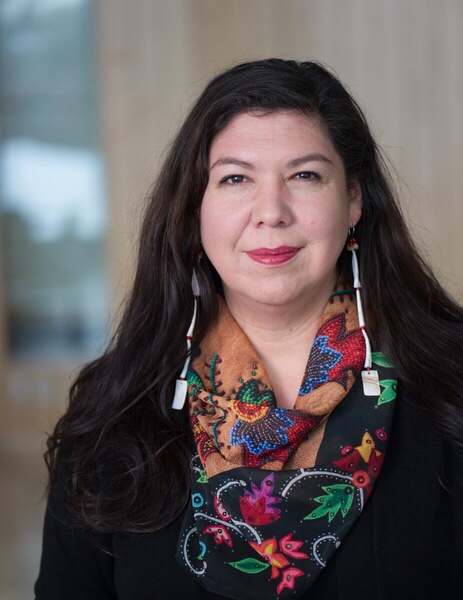 Tasha Hubbard’s documentary on the killing of Colten Boushie and the fight for Indigenous rights weaves a profound narrative encompassing the filmmaker's own adoption, the stark history of colonialism on the Prairies, and a vision of a future where Indigenous children can live safely on their homelands. Photo credit: George Hupka.

The family has called for a Royal Commission to address systemic racism in Canadian legal systems; a full public inquiry into Colten’s death, subsequent investigation, trial, and acquittal; a United Nations Special Rapporteur examination of racism within the legal system; meaningful change in the jury selection process to allow for diverse juries; and all levels of government to enhance victim support services.

The film will screen May 23rd in Saskatoon at Roxy, and May 31st in Regina at Rainbow, as well as other locations in Canada.